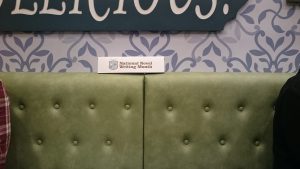 The Write a Novel in 30 Days Challenge

It’s that time of year again: the write a novel in 30 days National Novel Writing Month, aka (Nanowrimo).

I’ve been neglecting my blog of late. Mainly because I’ve struggled to get into the writing zone.  I can just about manage to churn out a page or two of texts, never mind think about what to write in my blog post since little has changed. I’ve been working on book three in my sci-fi fantasy series. I took a break from it because I felt my characters had gone a little flat and I only had myself to blame.

If you ever wondered whether or not it’s possible to write a book in 30 days, take the November writing challenge. Of course, you can decide to write a novel in 30 days any time of the year, but why go it alone? The idea is to write as quickly as possible (pause too long for thought and you’ll probably fail) to achieve a word count of 50,000 and a completed novel, which means writing your story from start to finish and revising it later.

Some people believe there is some sort of “write a novel in 30 days formula”. I guess there is in the fact that you should have an idea about what you are going to write in the first place by writing an outline beforehand.

I have started revising the story I wrote during last year’s National Novel Writing Month. My aim for this month isn’t to hit 50,000 words of a new story, rather revisit what I’ve written and try to produce some fresh and propelling material. Fingers crossed!

Fip Hopkins was sitting on the front stoop of his house in the tiny village of Colton when the gardener came to take him away. He was seven-years-old.

The gardener offered Fip’s parents eight pieces of gold. It was enough to guarantee they need never work again.

A gardener’s apprentice was just as respectable as any apprenticeship in those days. The gardener’s name was Wilbur Booms. He was a stout fellow who dressed in a coarse waistcoat and a rather large wicker hat. He beamed when he saw the boy and prodded him in the belly to check he was well fed. He had travelled many miles for many days. He didn’t want a weak child accompanying him on the journey back to his home.

The boy’s mother gave Wilbur some salt bread. She also gave him two shiny red apples and a sliver of pork and cheese. Wilbur accepted them and placed them in the satchel he wore across his shoulder. He thanked the Hopkins’ for their hospitality and took the boy’s small hand in his. He lifted the child onto his wagon. They then took the long dirt road through Buxley Woods and into the great wide world that Fip Hopkins had never known.

Fip Hopkins wasn’t much of a talker, Wilbur discovered. The boy spent most of his time gawking as if he couldn’t quite believe he wasn’t in his own home anymore. It didn’t bother Wilbur in the slightest. He couldn’t complain. The boy did as he was told.

Fip was a little young to be an apprentice. They usually started at eleven years of age. But Wilbur wanted to get a jump start on things. He wanted someone young enough to mould. Moulded apprentices made excellent gardeners. They didn’t answer back, they were meticulous craftsman and they were not afraid of hard work. He had started his apprenticeship at the age of four and it hadn’t done him any harm.

Wilbur lived in a house nestled in the open countryside of a village called Pond Mill. The house had a misshapen roof and triangular windows. At the front of the house was a small garden surrounded by a green picket fence. To the rear of the house was a chicken coop and a paddock for Wilbur’s two fat mares: Fire and Flash.

One day, when Wilbur was pointing out all the plants in his garden, the young apprentice declared that he missed his parents. The remark caught Wilbur by surprise because the boy had not shed a tear since his parents had hugged him goodbye and he had noted that the boy had made no effort to hug them back.

Wilbur gave the boy a stern glance. He didn’t like tears and tantrums.

‘When will I see ma and pa again?’ said Fip.

Had the boy not been paying attention? Wilbur would have to go through the names of the plants all over again. The boy would need to recite them in his sleep if he was ever going to amount to a modest gardener. An apprentice had to wait two years before they saw their family again, assuming, of course, their parents wanted to see their child again, which in most cases they did not.

‘A long time,’ said Wilbur. The boy had been in his service for little over a week. In time, the boy would forget he ever had parents.

‘No tears boy. Now, what is this plant here?’

‘A-a Fragwim,’ the boy mumbled. A tear plopped onto the plant’s dark leaf.

Wilbur took out his garden shears and clipped the plant clean from its stem. He placed it in his basket and sighed. ‘You should be excited to be here. It’s very honorable to be the apprentice of an esteemed gardener such as myself. I could have chosen any child in the land but I chose you.’ Stooping, he gripped Fip by the shoulders. He looked deep into the boy’s watery eyes. ‘Do you know why I chose you, Fip?’

The boy’s eyes went wide with wonder. He shook his head.

‘Because you’re special. So, you must be strong and brave. And you must never ever water the plants in my garden with your tears. Understand?’

If you do manage to complete the write a novel in 30 days challenge with NaNoWriMo, you’ll receive one of these swank certificates! 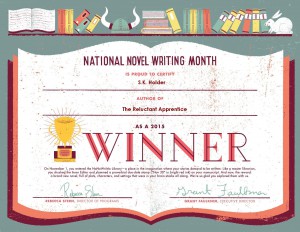